Shortly after we installed the fan, we put in a couple windows we found on eBay. The fan install gave us confidence to cut more holes in the trailer 😀. After watching a bunch of YouTube videos, we traced a template of the window frame on a piece of cardboard and cut it out. Then we taped the template on the trailer and traced it out. We took the card board off and put painters tape on both sides of the trace so the jig saw wouldn't scratch the trailer as we cut.

If you take your time, measure three times before cutting, it's not too difficult. I took my time with the jig saw and let it do the work. I didn't push hard and it only took about 15 minutes to get the window hole cut out. The windows we installed had a built in gasket which is really nice... no need to mess with butyl tape. We applied Eternabond tape along the window cutout before mounting the window to ensure any water that gets in won't go between the outside wall and insulation.

A note on installing the window - have a helper. When mounting the internal frame it's helpful to have someone hold the window in place. 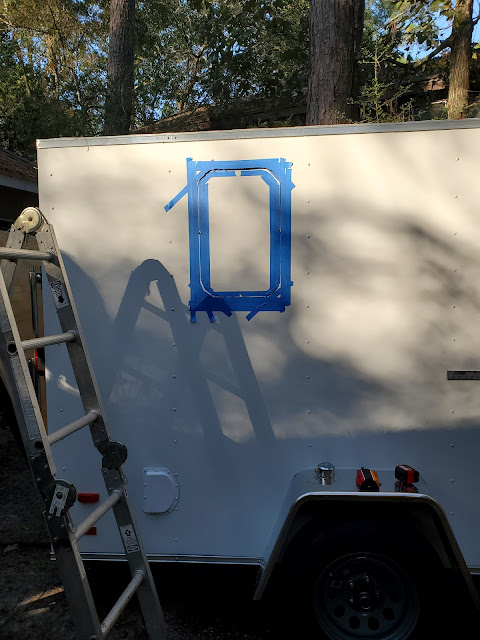 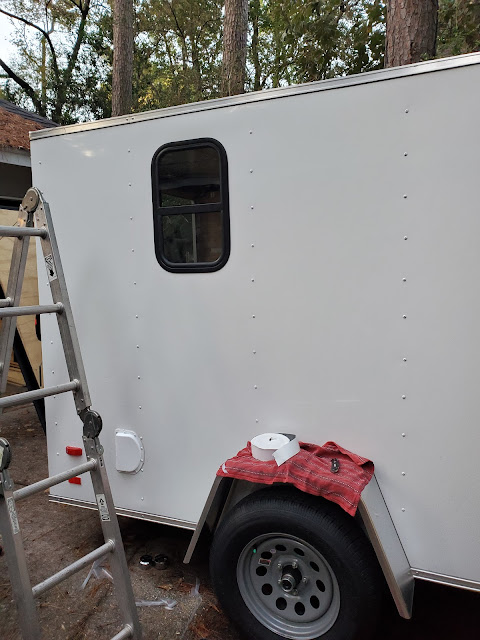 We did eventually replace one side with a larger window that we'll cover in a later post.

Popular posts from this blog 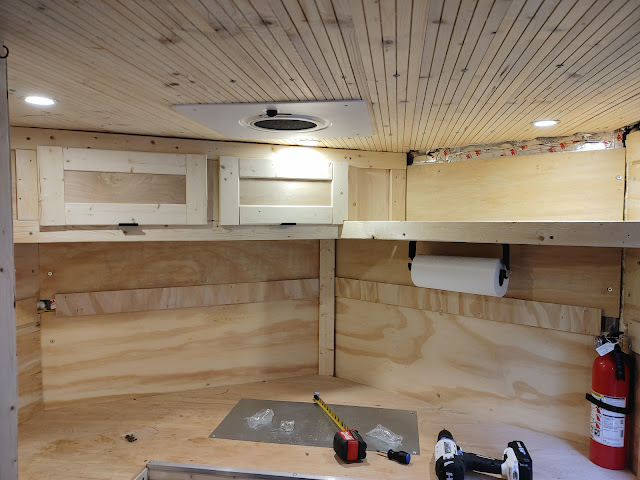 We built a basic set of overhead cabinets with shaker style doors for one side of the vnose in the kitchen, and put a shelf on the other side. The cabinets are simple 2x2 construction mounted with screws to the wall framing. We finished the face of the cabinets with 1x3's and shaker style doors we made with 1x3's and 1/4 in plywood. The finished product looks decent and is very light weight. We also made a cabinet door for the lower kitchen cabinet to match the overheads.  A small set of shelfs was added for more storage near the seating/bed area. These have proven to be very useful for phones, board games, and smaller items. I may add cabinet doors in the future.. still considering options.
Read more 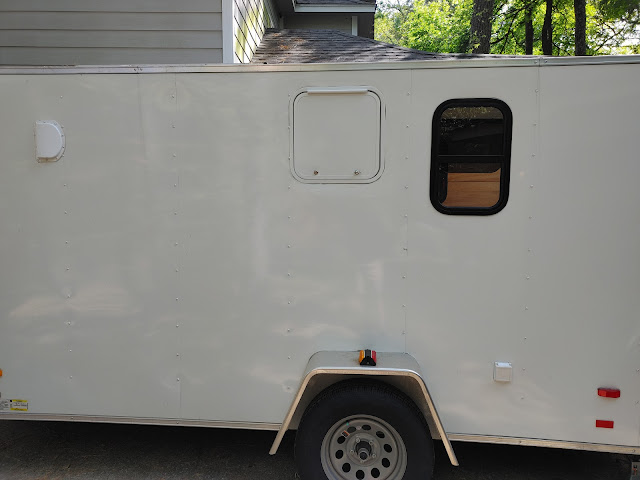 I had a hard time deciding which way to go for AC in this trailer. I really didn't want to deal with a roof top unit (installation or cost), and a mini-split seem like overkill for our simple camper. I do love how quiet a split is and they can be less expensive than a rooftop, but the complexity was really what kept me away. We ended up going with a 5000 BTU window AC unit and mounting it through a hatch on the side of the trailer. The hatch installed just like a window - cut hole, butyl tape the exterior frame, line the cutout with Eternabond tape, and screw in the frame. The hatch I purchased did not come with a frame, so I created one using 1/4" aluminum flat bar and framing it with wood. One advantage to this setup is we don't have to haul around the AC when it's cooler, and we can open the hatch for more daylight or fresh air. The small AC unit is easy to lift into place, anything larger and we would have had to consider installing the rear door to support the wei
Read more 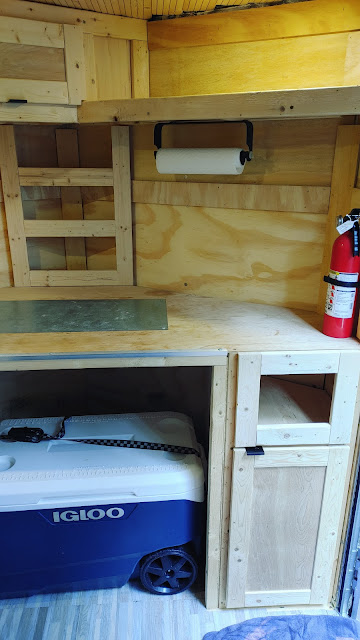 It seems we are continually optimizing our storage spaces and we still don't seem to have enough places to put "things".... like cell phones, binoculars, or shoes. Food, clothes, blankets, tools and camping gear we have pretty well figured out. After spending time on Google to see what others have done we decided we would add a few more shelfs in the kitchen area, some cargo net pockets in the seating/sleeping area, and added a wall of pegboard in the kitchen for hooks and some baskets. I built a small 3 shelf unit up in the nose of the kitchen for small things like bug spray, sunscreen, spices, etc. I also framed in the shelf we have above our lower cupboard, and that helped keep things tidy.  We installed another shelf in the forward section of the kitchen by our cooler space and that created space for water storage out of the way of everything else. We also put 10 hooks up in various locations to hang collapsing bins, hats, bags, etc. The pegboard is installed on the w
Read more